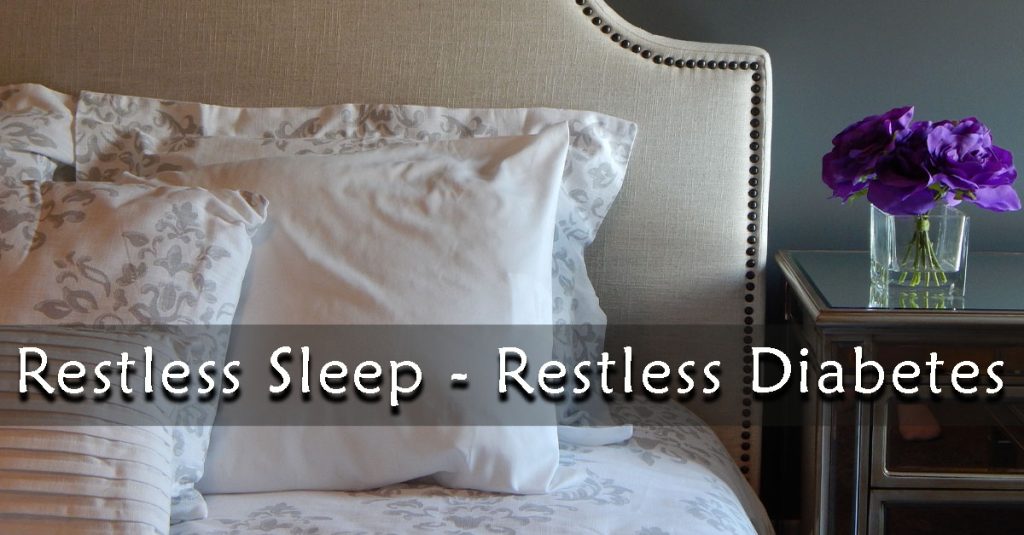 Thirty-five percent of people report getting less than the recommended seven to nine hours of sleep nightly.[1] People who don’t get enough sleep are prone to health problems, including type 2 diabetes. How sleep or lack of it affects diabetes is still being investigated, but it’s possible that for some people, preventing or controlling diabetes is as simple as getting an extra hour or two of z’s each night. People who suffer from sleep disturbances are at risk for obesity, diabetes, and coronary artery disease, according to research from the Perelman School of Medicine at the University of Pennsylvania. The research analyzed data of over 130,000 people and indicated that general sleep disturbances such as difficulty falling asleep, staying asleep, or sleeping too long may play a role in the development of cardiovascular and metabolic disorders.[2] The study discovered a clear relationship between sleep disturbance and diabetes. The findings suggest that getting a better night’s sleep may lead to better blood glucose control. Researchers at Cedars-Sinai Medical Center found that just one night of sleep deprivation can decrease insulin sensitivity equal to the effect of six months of a high-fat diet.[3] This could mean that for type 2 diabetics, getting enough rest could contribute significantly to managing blood sugar. Diabetes and sleep have a complicated relationship. The better we can manage the symptoms of diabetes the better our sleep should be. Exercise, healthy eating habits, proper rest, and regular doctor visits could be part of the process in managing the symptoms of type 2 diabetes.

Sidebar
We use cookies on our website to give you the most relevant experience by remembering your preferences and repeat visits. By clicking “Accept All”, you consent to the use of ALL the cookies. However, you may visit "Cookie Settings" to provide a controlled consent.
Cookie SettingsAccept All
Manage consent

This website uses cookies to improve your experience while you navigate through the website. Out of these, the cookies that are categorized as necessary are stored on your browser as they are essential for the working of basic functionalities of the website. We also use third-party cookies that help us analyze and understand how you use this website. These cookies will be stored in your browser only with your consent. You also have the option to opt-out of these cookies. But opting out of some of these cookies may affect your browsing experience.
Necessary Always Enabled
Necessary cookies are absolutely essential for the website to function properly. These cookies ensure basic functionalities and security features of the website, anonymously.
Functional
Functional cookies help to perform certain functionalities like sharing the content of the website on social media platforms, collect feedbacks, and other third-party features.
Performance
Performance cookies are used to understand and analyze the key performance indexes of the website which helps in delivering a better user experience for the visitors.
Analytics
Analytical cookies are used to understand how visitors interact with the website. These cookies help provide information on metrics the number of visitors, bounce rate, traffic source, etc.
Advertisement
Advertisement cookies are used to provide visitors with relevant ads and marketing campaigns. These cookies track visitors across websites and collect information to provide customized ads.
Others
Other uncategorized cookies are those that are being analyzed and have not been classified into a category as yet.
SAVE & ACCEPT